"Boruto" Manga Series to be Serialized Monthly in Shonen Jump 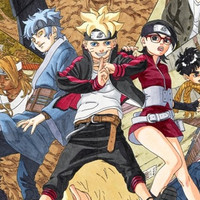 Instead of the original Naruto manga creator Masashi Kishimoto, Mikio Ikemoto, one of his assistants, illustrates the upcoming series telling the adventures of the new generation characters. While supervising the new series, Kishimoto is also scheduled to provide a one-short spin-off story of Boruto drawn by himself in the magazine next spring.