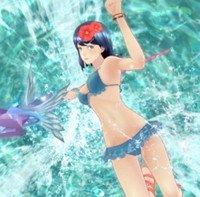 I'd love to just headline these stories with the Japanese title of the game, Genei Ibun Roku #FE, but I'm not convinced that everyone is familiar with the name. For now it shall simply stay being referred to as "that crossover between Fire Emblem and Shin Megami Tensei, which is a good enough way to let people know Nintendo has another new trailer on the official website.

Genei Ibun Roku #FE hits Wii U in Japan on December 26, with a western release to follow in 2016.