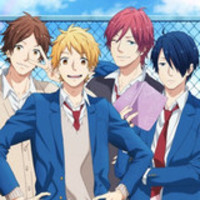 French distributor Kazé Manga and Anime Digital Network (ADN) announced the acquisition of the manga and anime of Nijiiro Days ("Rainbow Days"). While Minami Mizuno's manga is ongoing at 10 volume, they list that the anime will run 26 episodes at 13 minutes in length each.

The winter anime is directed by Tetsuro Amino and Tomihiko Ohkubo and animation production by Studio Reed.