"The Green Inferno" caused otaku to vomit, then debate audience for anime 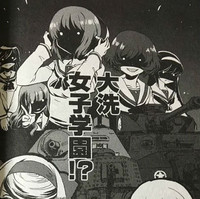 Today, Universal releases Eli Roth's cannibal homage horror movie The Green Inferno on home video in North America. This notoriously grisly and divisive film about student activists who meet a bad end in the Amazon rain-forest is still horrifying Japanese theatergoers with its gruesome theater lobby art by horror illustrator Kou Kitahara. It was originally released in Japan November 28th, and promoted a week before that. Meaning, a trailer ran in front of the November 21st release of the Girls und Panzer movie.

That caused some issues!

Specifically, Tachikawa Cinema City showed the "Red Band' (restricted version, NSFW, or in Japanese ratings parlance, R18). After Girls und Panzer fans suppressed their urge to vomit long enough, Tachikawa heard their complaints and issued an apology and replaced the trailer in future screenings with one for Persona3.

This incited a bit of online collective education about the American ratings system, and a lot of debate (gathered on Together.com) about who goes to see anime movies in theaters in general and Girls und Panzer specifically, as well as how the content of anime correlates to live action.

• Do parents take children to see anime movies that aren't marketed to families? (that mostly wound up as a pointer to the reports of cryings kids at the Madoka Magica movies.)

• How many school age viewers go to see a movie like Girls and Panzer, and should that audience be allowed to see a trailer like Green Inferno's?

• Are older people interested enough in the subject (tanks, military) to see a movie like Girls und Panzer, and if so, would they be offended by the the Green Inferno trailer?

• If Girls und Panzer can do a tie-in with a movie like the R-rated Fury, why can't it run with a Green Inferno trailer? Where is the line there?

In other words, the trailer exposed debates about the audience for anime, especially when it's shown outside the context of personal TV.

Thumbnail from Takeshi Nogami and Takaaki Suzuki's spin-off Girls und Panzer: Ribbon no Musha, which is featured on the cover of today's issue of COMIC FLAPPER.