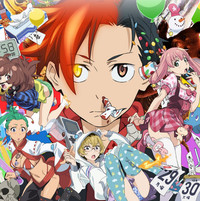 The Punch Line anime is taking a nosebleed dive into the world of adventure games on PlayStation 4 and PS Vita, and now we have a release date. Punch Line will launch in Japan on April 28 in both a ¥7,800 ($66) standard edition and a ¥10,800 ($91) limited edition that comes with an art book and a drama CD.

Punch Line has players searching through heroines' rooms for the Nandala Gandala book, laying out pranks along the way. Successful pranks will level your character up, but be sure to keep an eye on your Outbreak Gauge. Spotting any of the heroines' delicates will cause it to increase, and the entire human race will be destroyed if it reaches its max level.

Fans of the anime can look forward to some parts not featured in the series, and the second half will employ different mechanics from the first. Zero Escape writer Kotaro Uchikoshi handles the scenario, which adds 10 episodes over the anime's 12. The voice cast from the anime returns for the game.

If you haven't seen the game in action, here's a trailer from 2015's Tokyo Game Show: