The voice actresses for the newly joined three Outer Sensho, will be revealed in a Nico Nico Live webcast January 27th 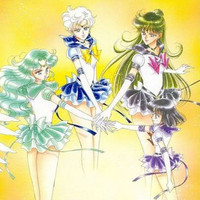 Following this week's announcement that the upcoming Sailor Moon Crystal third season, based on the manga's Death Busters arc, is slated for spring 2016, a group shop of the Senshi, including the Outers, has been spotted. Get a look after the jump.

to work on anime production.

and Sailor Saturn, will be revealed in the live-broadcast program on Nico Nico Live to be streamed at 20:00

on January 27 (JST). January 27 is the birthday of Haruka Tenou/Sailor Uranus.

New #SailorMoonCrystal image with all our girls!!!!!! I WANT COLOR NOW PLEASE. pic.twitter.com/NGOcGdKsSd