"Dead or Alive Xtreme 3" Pushed Back One Month 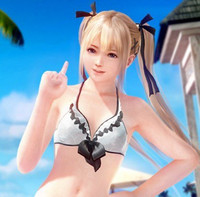 Those looking forward to digging into the import version of Dead or Alive Xtreme 3 will have to wait a little longer. Koei Tecmo originally set the next game in the bouncy spin-off series for a February 25 launch on PlayStation 4 and PS Vita in Japan, but it's been pushed back one month.

Dead or Alive Xtreme 3 will now launch in Japan on March 24, so be sure to mark your calendars with two large circles that have two smaller circles inside them.