"Mr. Osomatsu" Is, Naturally, Being Turned into an Otome Game

Idea Factory summons the powers of Otomate for upcoming game 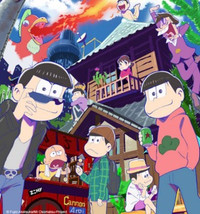 If you ever watched the Mr. Osomatsu anime and thought, "I'd love to have the opportunity to date one of those smokin' hot sextuplets," you might just get a chance. Idea Factory and its otome game wing Otomate announced plans to make an otome game based on the Osomatsu-san anime, and while we don't have further info to go on, do we really need it? We can just enjoy the news as is for now.

So yeah, we'll have to wait for word on what platform the Osomatsu-san game is destined to grace. In the meantime keep dreaming about which Matsuno brother you most want to woo.