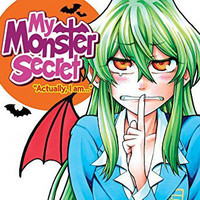 New York Times' Manga Best Sellers list has recently been dominated by One-Punch Man and Tokyo Ghoul, for the latest, January 31 top 10, they're represented by four and two slots respectively. Naruto is there with The Seventh Hokage and the Scarlet Spring, at #2 for its second week, along with vol. 72. Blue Exorcist's volume 14 debuts at #4. Attack on Titan is absent for a second week. And, new to the list is  Eiji Masuda's My Monster Secret, the anime for which is known as Actually, I Am.

NYT describes the series, released in North America by Seven Seas "Kuromine Asahi learns that the quiet girl in his high school is actually a vampire. Will he be able to keep her secret?"

Sweets Paradise Teams Up with "Actually, I Am" for Collaboration Cafe