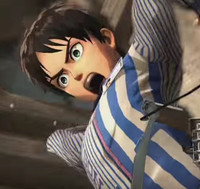 If you ever wanted to see what it would look like if Eren fought Titans while dressed up like an employee of a Lawson convenience store, Omega Force's Attack on Titan game has made it a reality. The costume is included for those who pick the action game up at Loppi HMV, and you can see it along with Armin's Treasure Box-included Attack on Titan: Junior High costume below.

Attack on Titan hits PlayStation 3, PlayStation 4, and PS Vita in Japan on February 18, followed by the west this year.

13 Sentinels: Aegis Rim is Coming to Nintendo Switch in April 2022