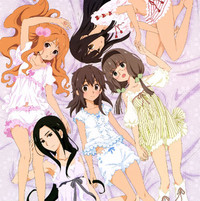 Card game based anime movie selector destructed WIXOSS opened in Japan for a limited theatrical run last weekend, debuting in the box office ranking at #13, behind The Martian, locally known as Odyssey, leading for the second week. Warner Bros. is drumming up the WIXOSS hype with a new trailer, set to Kanon Wakeshima's theme "Love your enemies."

The 91-minute film is basically based on the story of the TV anime series, but with two new characters, Rumi voiced by Rie Kugimiya and Sachi Togasaki by Yoko Hikasa, and an alternate ending. The 1st TV anime selector infected WIXOSS was aired for 12 episodes from April to June 2014, then the 2nd season selector spread WIXOSS followed with another 12 episodes four months later.