Beyond reporting that he was "fairly confident" that production will begin this year, Lee said “it’s definitely for adults" 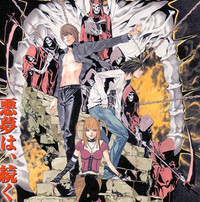 Movie news site Collider recently had a chance to speak with Roy Lee, producer on the Warner Bros.' live-action adaptation of manga thriller Death Note at D.I.C.E. (Design, Innovate, Communicate, Entertain) Summit 2016. Adam Wingard is set to direct with a script by Fantastic Four's Jeremy Slater and Lee gave the latest status, saying Wingard “is currently waiting for us to officially greenlight the movie, but we have a cast in place. I think it’s been reported but I don’t remember yet, I’d have to check the site, so I don’t want to say anything yet. But it’s a movie we’re planning on making this year.”

Beyond reporting that he was "fairly confident" that production will begin this year, Lee said “it’s definitely for adults. It is zero chance it will be below an R-rating,” and went on to say that the tone of the film “will be one of the first manga adaptations that feels very grounded but still has fantastical elements.”

Last September, Variety reported that Nat Wolff, the star of adaptations of John Green’s teen-lit hits The Fault in Our Stars and Paper Towns, was in final negotiations to star as the male lead, with Margaret Qualley (The Leftovers, The Nice Guys - Rainey Qualley’s sister and daughter of Andie MacDowell) later named the likely female lead.