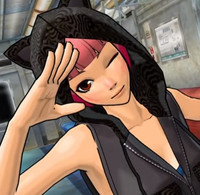 It looks like pre-orders for Senran Kagura producer Kenichiro Takaki's beat 'em up Uppers aren't doing as hot as Marvelous would like. As a result, the PS Vita game has been pushed back from its original launch date of April 21 to an unspecified date.

Despite the low pre-order numbers, Takaki wants to "believe in the power and potential of [Uppers] even more," and hopes to take the additional time to promote the game further. According to his blog post, "If we consider today's market, [the pre-orders aren't] numbers that we can realistically swallow."

In the meantime, the team behind Uppers is hard at work to make the finished product as good as it can be. A demo launched in Japan last week.

If you haven't seen Uppers before, here's one of the most recent digest videos, showing playable characters Nicole and Tenmei Sanada in action: