Shonen Jump got an anime adaptation from Toei in October 2014 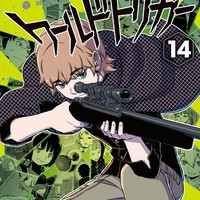 Daisuke Ashihara's World Trigger, which started running in Shonen Jump in February 2013, and inspired an anime adaptation from Toei in October 2014 will be losing that anime after this season. The run ends with its second season, anime-original Fugitive Arc/Toubousha-hen this March.