In recent years, they've been sharing some anime on their YouTube channel, such as a 2014 post of Shoji Kawamori's "Spring and Chaos" 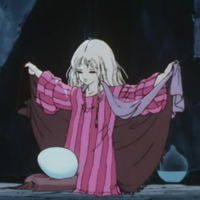 Along with their manga releases, in the 00s Tokyopop brought a number of anime releases to North America such as GTO, Rave, Reign, Initial D, Marmalade Boy, Saint Tail, Vampire Princess Miyu, and Brigadoon. In recent years, they've been sharing some anime on their YouTube channel, such as a 2014 post of Shoji Kawamori's feature inspired by works of beloved poet Kenji Miyazawa, Spring and Chaos. This weekend, they've added early Mamoru Oshii feature Angel's Egg.

Tenshi no Tamago 天使の卵 ("Angel's Egg) is one of the rarest gems in all of anime - a pure art piece created in 1985 by Mamoru Oshii 押井守 ("Ghost in the Shell") and Yoshitaka Amano 天野喜孝 ("Final Fantasy"). If you're expecting an action-packed anime with scantily-clad sex bunnies, don't click here. This is about pure beauty and symbolism.

Angel's Egg follows the life of an unnamed young girl living alone in an abandoned city. She cares for a large egg which she hides under her dress, protecting it while scavenging the decrepit Neo-Gothic/Art Nouveau cityscape for water and food. In a prologue, an unnamed soldier watches as an orb-shaped vessel, decorated with thousands of goddess-like sculptures, descends from the sky. Awakened by the orb's alarm, the girl begins her day of scavenging, but soon crosses paths with the soldier on a wide street traveled only by roving tanks. Frightened by the soldier, who carries a threatening cross-shaped device over his shoulder, the girl runs off down an alley. When she returns to investigate, the soldier has left. She resumes searching for food and glass bottles, avoiding the ominous figures of men clutching harpoons which scatter the cobbled streets.

After being challenged on the posting, Tokyopop removed the video

@mikef_ah @TOKYOPOP it's a masterpiece and MUST be released officially! Let's beat the drum to make it happen!

@bunnycartoon there's no mystery here guys - it's just a repost to build awareness about Angel's Egg. Glad you're discussing it!

@fredjfrancis @bunnycartoon @NJ_ guys this is not a business for TOKYOPOP - we're simply building awareness for this masterpiece.

@fredjfrancis our bad on that one. We'd be happy to do so.

@bunnycartoon @fredjfrancis @NJ_ good point - we'll do a review video and take it down. Mea culpa.

@bunnycartoon @fredjfrancis @NJ_ sure, your reasoning made sense - we hadn't thought it thru but will now make a review video. Thank you!