"Actually, I Am" Teases Announcement 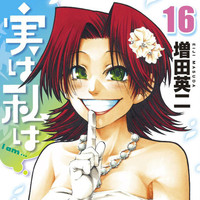 Eiji Masuda's Jitsu wa Watashi wa, or Actually, I Am as its anime is known in English or My Monster Secret as its manga is translated as, has teased that an announcement is coming in the upcoming issue of home manga magazine Shounen Champion.

The relationship comedy about vampires, aliens, demons and such secretly attending or running a high school was adapted into a Summer 2015 anime, and was recently the subject of a stage play announcement.

Sweets Paradise Teams Up with "Actually, I Am" for Collaboration Cafe