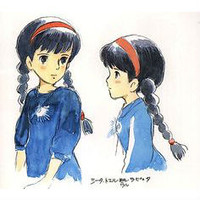 In addition to their anime news regarding Hunter x Hunter's English dub cast and streaming plans for JoJo's Bizarre Adventure and TerraFormars, at this weekend's Chicago Comic & Entertainment Expo (C2E2) Viz Media announced plans for art books Yoshitaka Amano Illustrations, featuring the works illustrator known for his contributions to Final Fantasy, Vampire Hunter D and Gatchaman, along with The Art of Castle in the Sky, featuring a look behind the scenes of the first Studo Ghibli movie.

#C2E2 #VIZPANEL Roundup - From Publishing, we announced the "Yoshitaka Amano Illustrations" and "The Art of Castle in the Sky" artbooks !

New chapters of Hunter x Hunter to be simulpubbed in WSJ in April, along with Boruto one-shot. #VizPanel #C2E2 pic.twitter.com/JHj7FeUtSi

Nine New Tees Prove You're Never Too Old for Ghibli