Konami partners with China's Tencent on iOS and Android game 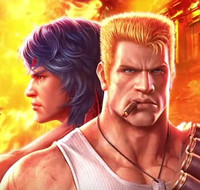 China's Tencent has teamed up with Konami on Contra Mobile, which is bringing the classic action series to iOS and Android devices. Naturally, this means there will be microtransactions, though it's currently not clear on how prevalent they'll be. At the moment Contra Mobile is just confirmed for China, and includes touch controls and player-versus-player multiplayer. You can see footage that debuted at this past weekend's annual Tencent UP event below.