PC Launch of "Hyperdevotion Noire" Pushed Back to April 26 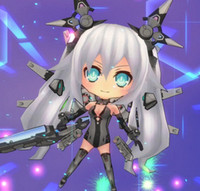 There's a slight delay on the horizon for anyone looking forward to the PC release of Hyperdevotion Noire: Goddess Black Heart. The strategy-RPG spinoff was originally slated for an April 18 launch on Steam, but will now arrive on April 26.

When Hyperdevotion Noire launches it will be priced at $29.99, with a launch discount of 40% in place for the first week. The PC version ups the visuals to 1080p, and here's how Idea Factory International describes the story:

Gamarket - a world where Goddesses of four nations are locked in heated battle against one another for total domination. Just as Noire, the leader of that Lastation, comes close to defeating the other Goddesses, they are robbed of their powers by an unknown force. Now the Goddeses must unite to fight against a new threat and save Gamarket!