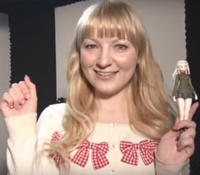 NHK World Newsline has published a new video profile on Russian voice actress Jenya in English following the smash success of the Girls und Panzer feature film in Japan. The four-minute profile goes into her struggles to make it as a voice actress in Japan's notoriously tough industry, while showcasing the work she puts in to perform for herself and her growing legion of Japanese fans. The report can be seen below: