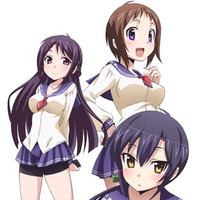 The official website for the TV anime adaptation project based on Yumi Nakata's erotic comedy manga Okusama ga Seitokaicho!/My Wife Is the Student Council President! today posted a "No.0" main visual for the upcoming second season, which introduces a new character Honoka Saijo, who is the president of the photo club. And the site also announced the official title for the new season will be Okusama ga Seitokaicho!+!/My Wife Is the Student Council President!+! (adding "+!" in the end). In advance of the premiere of the new season, the rerun of the 12-episode first season will begin on AT-X and Nico Nico Douga in July.

The first season produced by Seven (I Can't Understand What My Husband Is Saying, Magical Somera-chan) was sired in Japan from July to September 2015 and has also been available on Crunchyroll. More details of the second season will be revealed soon.