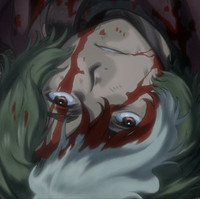 Among the remarkable elements of WIT STUDIO's steamtech zombie series Kabaneri of the Iron Fortress is TV anime's first credited Chief Makeup Animator. Animate Times has profiled Sachiko Matsumoto, previously worked on the production teams of WIT's Hōzuki no Reitetsu anime, and Production I.G's Guilty Crown and Gost in the Shell: Arise, along with showing examples of the work.

The extra attention to the characters' faces and hairs allows cuts of the anime to capture the details in classic character designer Haruhiko Mikimoto's (Macross, Gunbuster, Gundam 0080) original work, along with the nuance of the phsyical and emotional effects of the action on the characters. In a new step in the anime production, software called VPaint Animation is used to apply pencil or brush textures.

A friend asked me earlier and it's been a recurring thing this season so I guess it's worth talking about Kabaneri's 'Makeup Animation'.

Kabaneri has a Chief Makeup Animator with a group of digital artists adding extra detail and shading to some shots. pic.twitter.com/xWjsjYGYDN

The official examples provided aren't ideal, but you can tell they focus on hair detail, eye texture, eyelashes, etc pic.twitter.com/lGVQnMNMzN

There's articles bragging about the role's first appearance in TV anime - technically true, at least with this specialized&focused approach.

As nice as looks there's obvious cons (and this is coming from someone not even watching). The contrast with the 'regular' shots is awkward.

Not like shows should have a homogeneous look, but if it feels like there's 2 styles coexisting and one's just better then something's off.

And also, lol @ the kind of people who complain anime's no longer hand-drawn (yeah I dunno) but praise Kabaneri's fully digital shading.

There's also a look at the series character designs