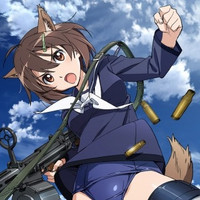 The official website for Brave Witches, the third TV series from the Strike Witches anime franchise today announced that it is set to premiere in Fall 2016. It will be a stand-alone new series featuring the 502nd Joint Fighter Wing squadron girls, not the third installment of the original Strike Witches TV anime series.

In addition, a "Take Off" event to promote the new series is scheduled to be held at Yakult Hall in Tokyo on May 29. The main voice cast members will be revealed there. Currently, the only confirmed member is Natsumi Takamori, who has voiced Nikka Edvardine Katajainen in the Strike Witches OVA and the 2012 feature film. She will join the event with other three yet-announced cast from Brave Witches.

July to September 2008, then the second season by AIC Spirits followed for another 12 episodes from

was released from December 2014 to July 2015. SILVER LINK. continues to work on Brave Witches.