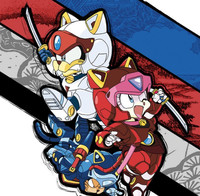 In addition to enjoying the dubbed comedy antics of Samurai Pizza Cats, you can now officially watch the Japanese basis for the series, Kyatto Ninden Teyandee. All subbed episodes are now up for Premium members, with free members able to watch 27 episodes per week.

Join Yattaro, Skashee, and Pururun at Pizza Cats, the most popular place in Edoropolis. On the surface, they're a trio of goofball delivery cats, but their actual identity is as a Secret Ninja Trio, the Nyankees! Led by Lord Wanko, the Nyankees are tasked with keeping the scheming Lord Korn and his evil Crow Ninjas, Gennari and Karamaru, from staging a coup against the dimwitted Shogun Yetyet.

Will Korn succeed - either in politics or as a cross-dressing geisha? Does Yattaro stand a chance of winning the heart of missile girl Onmitsu? Can Pururun become the lady of her dreams? And will anybody ever figure out a way to keep Princess Usa under control before she sentences the entire city to live on the Prison Island? Who are these so-called rescue members lurking in the suburbs, how does Nekomata get away with living on Wanko's tab, what's Otama doing in charge of the restaurant, and why hasn't the Narrator appeared to explain things yet, anyways?

Needless to say, all these questions will be answered and more as hilarity and hijinks ensue in this wacky action classic!

Originally broadcast in 1991 and created by legendary studio Tatsunoko Productions (Gatchaman, Speed Racer), Legendary Ninja Cats would become famous around the world in its dubbed form, Samurai Pizza Cats. This boxset presents the show in its original, uncut edition for the first time outside Japan, featuring the original Japanese audio with English subtitles on all 54 episodes.