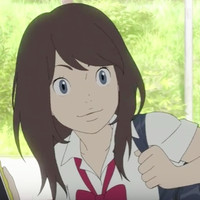 The official website for 50-year-old acclaimed anime director Kenji Kamiyama's new feature film Hirunehime -Shiranai Watashi no Monogatari- (Princess Nap -The Story of Unknown Me-) has released a 45-second first teaser introducing the voice of the protagonist girl Kokone Morikawa played by 24-year-old actress Mitsuki Takahata. Kamiyama is well-known for his directorial works for the Ghost in the Shell: Stand Alone Complex series (2002–2006), Eden of the East (2009), and 009 Re:Cyborg (2012). The film is set for a 2017 release in Japan, with Warner Brothers Japan distributing.

In Japan, Takahata is best known for her performance as Peter Pan in the Peter Pan musical play for six years between 2007 and 2012, and the Japanese dub voice of Ella/Cinderella in Disney's live-action 2015 film Cinderella. This is the first time for her to voice in a Japanese anime feature film.

The story is set in the Kojima area of Okayama Prefecture in 2020, just two days before the Tokyo Olympic

and Paralympic Games begin. It focuses on the relationship between the protagonist girl Kokone, who is

always sleepy, and her father. She recently keeps seeing the same dream over and over again, and she

learns the dream is connected to her family's secret that she has not known.

Animation Director: Atsuko Sasaki (Gargantia on the Verdurous Planet, Eden of The East)