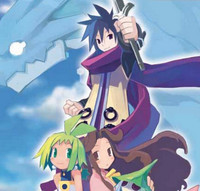 Earlier today NIS America announced plans to bring strategy-RPG Phantom Brave to PC via Steam this July. Originally released for PlayStation 2 in 2004, Phantom Brave's arrival on PC will be based on the 2009 Wii version, Phantom Brave: We Meet Again.

In addition to the base game, Phantom Brave PC will have the extra content from the PSP version, Phantom Brave: The Hermuda Triangle. Check out NISA's official PC trailer below: