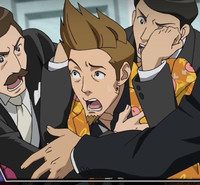 Capcom announced a special DLC chapter for Phoenix Wright: Ace Attorney - Spirit of Justice in Japan. "Turnabout that Crosses Time," which will be available as a free download from June 30 to July 20, looks like a good throwback for longtime Ace Attorney fans, and it's nicely timed considering the currently-running anime's source material.

Players can look forward to the return of Phoenix's childhood friend Larry Butz along with Maya Fey and Miles Edgeworth in a sequel to the main story. The DLC chapter will feature investigation and courtroom sections, but those who download it won't get to play until they clear the main game.

Phoenix Wright: Ace Attorney - Spirit of Justice launches in the west this September.

"Ace Attorney: Spirit of Justice" Prologue Arrives in English Along with the Demo