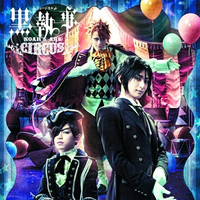 The 2016 show is based on the manga's popular fourth "Circus Arc" told from its 6th to 8th volume (chapter 24-37). The arc's TV anime adaptation produced by A-1 Pictures was also aired for 10 episodes from July to September 2014. The fourth musical is scheduled to perform at Tokyo Dome City Hall from November 18 to 27, at Canal City Theater in Fukuoka from December 3 to 4, at Amashin Archaic Hall in Hyogo December 9 to 11, then at Kariya City General Cultural Center in Aichi from December

17 to 18. General sales of the advance tickets will begin on September 4.