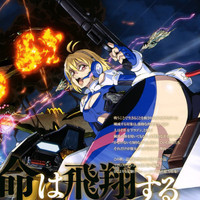 Sentai Filmworks has Cross Ange scheduled for two collections, offered on Blu-ray or DVD June 21st and August 23rd. They've been building toward these with an incremental announcement of the series' English dub cast, and they hit the big one this week with introduction of Ange voice actress Emily Neves.