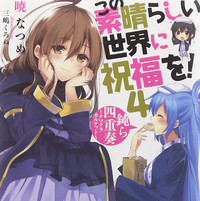 Both titles are from Fujimi Shobou, an imprint of Kadokawa Corporation, who acquired majority ownership of Yen Press this spring.

And the Konosubas take it home!!! The light novels, the manga -- you get it all! pic.twitter.com/6THVHAskGQ

That ought to be enough suspense...
Our first new reveal:
Death March to the Parallel World Rhapsody! pic.twitter.com/dJFmvFe3ZU