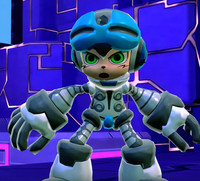 Poor Mighty No. 9, it just can't catch a break. Even after finally lining up a concrete release date following numerous delays, the game is now stuck with some truly cringeworthy voiceover in its new trailer. Your absorption powers will apparently "make the bad guys cry like an anime fan on prom night." See what other choice quotes you can pull from the Masterclass trailer below.

Mighty No. 9 hits Playstation 3, PlayStation 4, Xbox 360, Xbox One, Wii U, and PC on June 21 in North America, followed by Europe on June 24. 3DS and Vita versions will follow at some point.