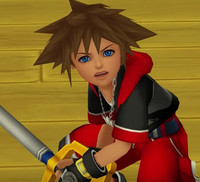 Say it with me now: Kingdom Hearts HD 2.8 Final Chapter Prologue! Be sure to say it aloud and in front of people who have no idea what Kingdom Hearts is. Square Enix promised an early look at the game's E3 trailer prior to next week's event, and they delivered along with the announcement that HD 2.8 is planned for a worldwide launch on PS4 this December.