Five voice cast of the show will join a talk show 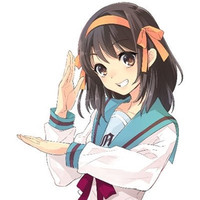 Kadokawa today announced that two screening events for the 10th anniversary of the first season of The Melancholy of Haruhi Suzumiya TV anime series will be held at Tachikawa Cinema City in Tokyo and Tsukaguchi Sunsun Theater in Hyogo on July 9. The first TV anime adaptation of Nagaru Tanigawa's Haruhi Suzumiya light novel series was aired for 14 episodes in Japan from April to July 2006.

Tomokazu Sugita (Kyon) are currently not included in the guest list.

The price for the advance ticket is 3,500 yen, and all the audience will get a 10th anniversary special bottle

cap. Advance entries for the tickets will be accepted till June 20.