RPG hits PS3/PS4 in Japan this August, PS4/PC in the west next year 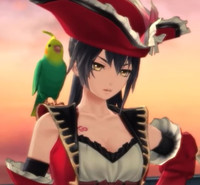 Last week we saw some pics of Tales of Berseria costume DLC, including, pirate, summer, and Japanese-style outfits. Now you can see the first set of downloadable costumes in motion thanks to Bandai Namco's latest promo.

Tales of Berseria hits PlayStation 3 and 4 in Japan on August 18, followed by an early 2017 western launch on PS4 and PC.