Games, anime, toys, and more are due out next summer 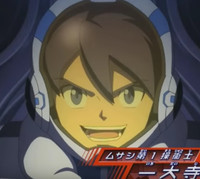 Even with Yo-Kai Watch doing well and The Snack World on the horizon, Level-5 isn't going to just stop working on large cross-media projects. The fifth was revealed during the Level-5 Vision 2016 event as Megaton Musashi, which is aiming to unleash a TV anime, action-RPG, toys, and more next summer.

The story of Megaton Musashi has the people of Earth in 2118 piloting giant Musashi robots to battle alien invaders known as Dorakuta. These enemies have already done a ton of damage to the planet, wiping out 90 percent of the population and creating a huge hole in the middle of Earth to use as a nest. Surviving humans who were evacuated to a Shelter during the invasion had the events wiped from their memory, but there are a chosen few who know how it all went down, and these will be our protagonists.

Here's the anime trailer that debuted during the event:

There aren't too many details on the individual items, but concept images show the game on both a tablet and Nintendo 3DS. The figures will be released alongside cards, and Level-5 will be teaming up with Jump for the manga portion of the project. During the presentation, a message from legendary mangaka Go Nagai (Mazinger Z, Cutie Honey, Devilman) said that he is looking forward to seeing Megaton Musashi in the pages of Jump.