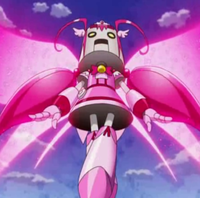 Netflix's streaming plans for August 2016 have been published. Of note, Glitter Force season 2, the continuation of Saban's localized version of 2012's Smile PreCure!, joins the offerings on August 26th. On the flip side, Death Note (2006), Naruto Shippûden the Movie: Bonds (2008) and Naruto Shippuden: The Movie (2007) are out on the 31st.

Check out their latest music video...