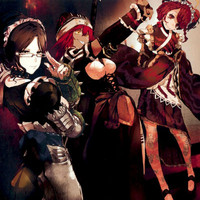 The September 30th limited edition of volume 11 of Kugane Maruyama and so-bin's light novel series Overlord, The Artisan of the Mountain Dwarfs, is set to feature a newly animated 30-minute Blu-ray featuring the super-deformed adventures of Ainz's combat maid squad, the Pleiades Six-Stars, along with the Floor Guardians. This has been previewed in a new Kadokawa promo.

Also announced, the 2015 anime will be marathoned on Nico August 11th.