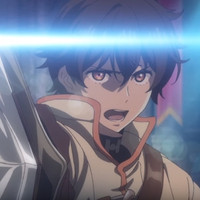 At the Kizuna no Daikanshasai Fan Meeting 2016 event held at AKIBA_SQUARE yesterday, the main voice cast for the upcoming TV anime Chain Chronicle: Haecceitas no Hikari (Chain Chronicle: The Light of Haecceitas), based on Sega Networks' popular smartphone RPG, were officially announced, confirming 48-year-old Akira Ishida reprises his role as the protagonist Yuri. He has played the character in the original game series since July 2013 and in its eight-episode OVA released in December 2014 as well. A 40-second teaser PV screened at the event is now legitimately available on YouTube.

As reported, its three-part "film edition" will get time-limited theatrical screenings from December 2016 to

for a limited time of two weeks, then the second will follow on January 14, 2017, the third will be released

on February 11. Advance tickets for the all three parts will go on sale on August 6.