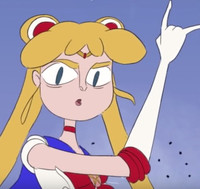 It's been a little over two years since the first Moon Animate Make-Up Sailor Moon fan project debuted, but now a sequel is here with even more fan participation. The second crowd-sourced group animation project has over 300 animators coming together to re-animate season 2, episode 68 of the classic Sailor Moon anime, "Protect Chibi-Usa: Clash of the Ten Warriors!"

Contributors cracked away at their respective shots from October 2015 to July 2016, and you can see the wide variety of styles on display in the finished episode below.

Annotations with credits will be added soon. For more information on how this one came together, you can see the original call for contributors on tumblr. There's also a Moon Animate Make-Up Facebook Page.