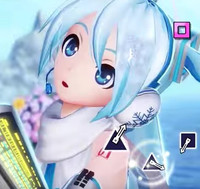 Sega is here to preview one of the upcoming DLC sets for Hatsune Miku: Project DIVA X ahead of its August 25 Japanese launch. This collection—which will be free from launch until September 25—comes with Snow Miku modules based on designs from 2010-2015, ranging from Classic to Cute.

There's no info on the DLC localization plans yet, but Hatsune Miku: Project DIVA X hits PS4 and PS Vita in the west on August 30.