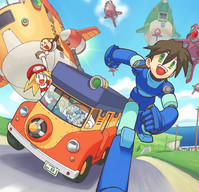 It's safe to say that, at least as far as Mega Man fans are concerned, Mega Man Legends 3 was one of the most disappointing game cancelations in recent years. The fourth entry in the series was originally announced for Nintendo 3DS in 2010, and Mega Man Legends: Prototype Version was set to kick things off with a prologue on the 3DS eShop in 2011.

It wasn't long after that it was officially canceled, though, and if Get Me Off The Moon's Mega Man Legends 3 Documentary has anything to say about it, fans are still feeling the pain. You might also know the group as 100,000 Strong for Bringing Back Mega Man Legends 3, and you can watch their 25-minute coverage of the game and its cancelation below.