New Testfire Demo will be available August 25 to 28 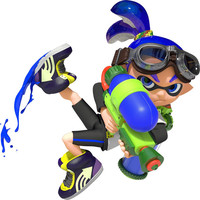 Nintendo is looking to recruit a whole new legion of Splatoon players, and kicking off the initiative is the return of the Testfire Demo. This means that anyone who owns a Wii U will be able to give the squid-now-kid-now shooter a spin by downloading the free eShop demo from August 25 to August 28 between the hours of 3:00p.m. and 5:00pm Pacific Time.

This Summer Splatdown event will give demo players access to Splatoon's multiplayer during the designated hours, allowing them to engage in Turf War battles with other players. Available maps will include Saltspray Rig and Walleye Warehouse, and players can look forward to fighting with Slattershot Jr., Splattershot, Splat Roller, and Splat Charger weapons.