Shinzō Abe took the baton for the 2020 Olympics in style 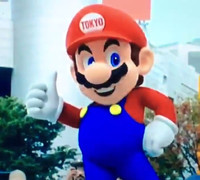 With the 2016 Rio Olympics officially ending, it's time to pass the baton to Tokyo, which will be hosting the event in 2020. Japan is pretty far from Rio, but that didn't stop Japanese Prime Minister Shinzō Abe from appearing at the closing ceremony in person thanks to his innate powers as SUPER MARIO.

There was also a brief appearance by Doraemon, as you'll see in part of one of the clips below. Unfortunately you'll have to squint, because they cut off the beginning part where he flies into view.

Japan's Prime Mister arriving to the Rio Olympics as Super Mario! I like the looks of the next Olympics. #tokyo2020 pic.twitter.com/12thVUZzLR