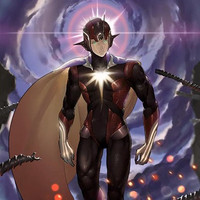 Yesterday we posted about a new site teasing something called Astro Boy: Edge of Time, including visual hints at other stars from God of Manga Osamu Tezuka's vast library of creations. Depending on what you were hoping for, you'll either be pumped or deflated once you find out that the item behind the teaser is a digital collectible card game.

Project Atom's Astro Boy: Edge of Time hit Kickstarter in search of a relatively modest $50,000, with an early 2017 release planned for PC (Windows, Max, and Linux) and iOS/Android devices. The game will feature both a single-player campaign that expands upon the Tezuka universe and multiplayer in competitive ranked or friendly form.

As for all those heavy-hitters listed along with the teaser, the team behind Astro Boy: Edge of Time includes:

You can learn more about the story, backer rewards, and stretch goals on the Kickstarter page, where you can also download a demo of the game.

INTERVIEW: All You Need is a White Piece of Paper and Pen: A Conversation with Monster and 20th Century Boys Creator Naoki Urasawa