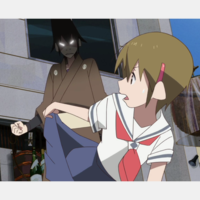 Ahead of the September 17-18 Kyoto International Manga Anime Fair, anime studio P.A. Works has announced that an Eccentric Family cast and staff talk is planned, and that it will feature new announcements. Tomihiko Morimi's (Tatami Galaxy) 2007 novel was adapted into a 2013 TV anime by the studio with Sayonara, Zetsubou-Sensei author Kōji Kumeta providing original character designs.

In Kyoto, humans, tanuki, and tengu live side-by-side. The Shimogamo family lives in Shimogamo Jinja’s Tadasu no Mori. The father, Soichiro, used to be the head of tanuki society, but without warning one day he was made into tanuki stew, and no one knows how it happened. He left four sons behind. They all live happily with their mother. After taking care of Professor Akadama, the Shimogamo family suddenly finds itself in a desperate fix. Will the truth behind how their father got stewed be revealed?! What does fate have in store for this strongly bonded family?!

[KyoMAF Evemt] At The Eccentric Family Event, the cast and staff will have a talk show. New announcements will be made.