Part 2 of trilogy to hit across the U.S. starting on October 22 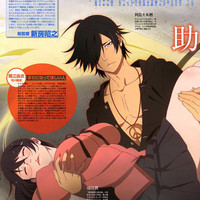 The story of Koyomi Araragi and the iron-blooded, hot-blooded, cold-blooded vampire: Kiss-Shot Acerola-Orion Heart-Under-Blade continues its journey west with the middle of Shaft's theatrical anime adaptation as Aniplex of America has confirmed their plans to release Kizumonogatari- Part 2: Nekketsu in 33 U.S. theaters starting on October 22.

This follows the movie's LA AkibaFest (www.AkibaFest.com) premiere on October 15.

US site www.Kizumonogatari-USA.com now features details on participating theaters, their respective showtimes, and how to purchase tickets.

Aniplex of America has also confirmed that patrons will receive a special giveaway item with each purchased ticket at the theater while supplies last. The movie will be distributed by AZOLAND PICTURES in the original Japanese language with English subtitles.