Junji Nishimura (Bakuon!!)-directed series is set to premiere on October 1 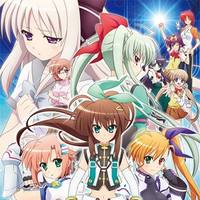 The official website for the new TV anime series Vivid Strike! today updated with a new key visual and posted a web-only 15-second CM featuring its ED theme song "Starry Wish" performed by 20-year-old Inori Minase who is also cast as one of the two protagonists, Fuuka Reventon. The anime's OP song "Future Strike" is sung by 21-year-old Yui Ogura who voices another protagonist, Rinne Berlinetta. The CD single of the OP song will be released on November 2, that of the ED song will follow one week later.

"The two girls who grow up at an orphanage, Fuuka and Rinne. In a relationship as childhood friends and sisters,

they have been dreaming of a bright future in spite of their poor life. But the two partings they have to face will

be changing their destinies."

Masaki Tsuzuki, the creator of the Nanoha franchise, provides an original story and scenarios, and Takuya

Fujima, who has been working on the Magical Girl Lyrical Nanoha ViVid manga series, works on original

character designs. In addition, characters from the Vivid series, including its protagonist Vivio Takamachi,

are included in the list, and the voice cast from the Vivid TV anime aired in 2015 will reprise their roles.

Fuuka Reventon: Inori Minase (Chino in Is the Order a Rabbit?)