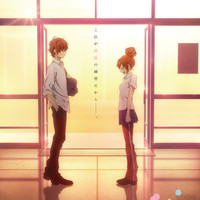 The feature is directed by Tetsuya Yanagisawa with Blade Dance of the Elementaler collaborator Maki Fuji serving as character designer and chief animation director.