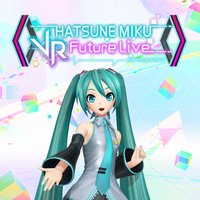 Sega detailed more plans for Hatsune Miku: VR Future Live, a standalone PlayStation VR app that puts you in the virtual audience of a Miku concert. The app itself will be free to download, with individual Stages available as paid downloads, and it's set to launch worldwide on October 13, a day earlier than previously planned.

Three Stages are on the way, each priced at $14.99, and the first will be available when the app hits the PlayStation Store on October 13. Here's what you'll get to experience in Stage 1:

More information on the second and third Stages will be revealed later. Here's how Sega describes the app:

Hatsune Miku: VR Future Live is a virtual reality Miku concert experience like no other. Putting on the PSVR headset transports you to a huge stadium filled with cheering Miku fans. Players can move throughout the audience or even up on stage to get the best vantage point of the event! They'll also be able to keep time with their controllers, err I mean glow sticks, during song performances in order to unlock various easter eggs. After progressing through three songs, players will get a special solo encore performance by Miku!