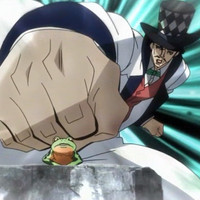 Adult Swim has confirmed an October 15th start date for JoJo's Bizarre Adventure, with the Hirohiko Araki phenomenon airing in the 12:30am slot. To get the Ripple flowing in anticipation, they've edited together a promo offering a look at the Phantom Blood phase.